This conversation, held around my thirty-sixth week of pregnancy, might strike some as a bit… insane. While we have no car, neighbors and friends had made it quite clear that they were available day or night to drive us. A taxi had taken me to have my first baby on a sodden Thanksgiving morning just nineteen months before—no reason not to call them again. Nonetheless, at forty weeks and four days I lurched onto my bike at a few minutes past five and, best friend at my side, pedaled through the light chill of the midsummer morning to go have a baby. And I didn’t want it any other way.

My contractions were a little less than five minutes apart. At a mile and a quarter with moderate hills, the ride would take about 20 minutes. That’s four contractions to deal with on the road, I reasoned. Maybe five. Easy.

I got on the bike immediately following a contraction, but the next one came sooner than expected. There was no one else on the road, and as I felt the sensation crest I breathed deeply, thought about the rotation of the pedals, and spun effortlessly as I let it move through me. Barely a waver. One down. My husband trailed us on the cargo bike with the birth bag.

Two more contractions passed in the same way, and then I saw the hill ahead. There are bigger hills in the city, steeper and longer ones, but this one was plenty daunting under the circumstances. I stopped at a stop sign, and started a contraction as I started rolling again. I reached the base of the hill just as that one faded. Slowly, deliberately, I started to climb. I found my lowest gear. I controlled my breathing. I spun to the top. As the road leveled, a fifth contraction overwhelmed me. I wobbled toward a parked car, and my friend gasped as I regained my course. And then we were there.

Hey! I rode my bike to the birth center! Should I hurry inside before the next contraction comes, or pause for a victorious picture? Pride won out, but barely, and the picture that we snapped bears witness to that next contraction. Five hours later, Kestrel Gayle Proctor came into the world, born underwater, sweet and healthy and ravenous. 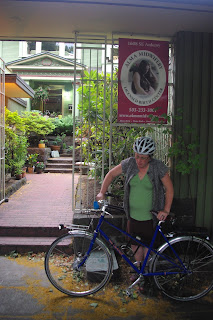 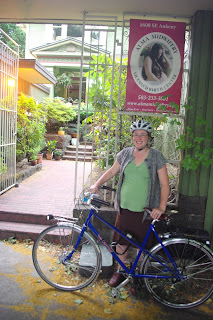 I’d ridden my bike throughout pregnancy. I’d toted my toddler around town most days. I’d raced the cyclocross season through my first trimester, battling nausea and fatigue for the chance to get muddy and sweaty in a field of beginner women laughing and cursing and hauling ass. I’d planned and led Kidical Mass rides, playing mother duck to fleets of slow-moving two- and three-wheeled ducklings as we explored the city and asserted the right of kids and families to a place on the roads. So with all that behind me, why not ride my bike in labor?
Barring bad luck, pregnancy is a time of health and vigor. A time that, in spite of incessant hunger or poor appetite or relentless heartburn or weeks of nausea, can be spent fully inhabiting one’s body. Forces tell us it is not: doctors and parents and partners stress our fragility and vulnerability, insisting that pregnancy should be defined by a long list of things to be avoided, sacrificed, and feared. They instruct healthy women to “take it easy” and engineer drugged labors or dangerous surgeries. They rob us of a chance to know and embrace our vital power as women. They are the voices of a society that, for all its progress, still sees women as weak. A society invested in keeping us from finding our strength.

Like natural childbirth, riding a bike for transportation is not best for all women. For those who need them, I’m grateful that there are hospitals and doctors and NICUs, just as I am glad that people who need cars and buses and taxis to get around can use them. But I’m also grateful not to have needed a hospital to give birth, and I am grateful each day that I don’t need an engine to get from here to there. Empowering women to take control of their bodies and their births improves their lives. So does empowering them to be their own engines.

The dominant transportation paradigm robs healthy women of a daily chance to know their full strength, just as the dominant birthing paradigm keeps them from discovering in themselves the unique power required to deliver a baby. In both cases, the state of “normal” is one that emphasizes weakness: an overdependence on technology to do what we are told we cannot. I reject those paradigms. Riding my bike every day is a choice that celebrates the fact that I can, that I am healthy and strong and fierce. In perhaps this respect only, Kestrel’s birth day was no different from any other. 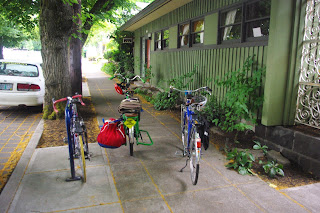 "Our Bodies, Our Bikes" is an issue of Elly Blue's Taking the Lane zine.  This essay was first published there.  If you haven't seen them, I highly encourage you to check out the whole Taking the Lane set.  The newest issue just got funding on Kickstarter!
---


(Thank you to Kori Beyer for riding along, for attending the labor, for being wonderful... and for the photos above.)
Posted by inkandpen at 9:11 PM

Nice work! I am impressed, I was bummed to skip cyclocross this year but I was well into my 2nd trimester at that point. I am 38.5 weeks pregnant and still riding around town though... thought about riding to the hospital. The question is, how did you get the baby and your bikes home??

Oh, and Kori towed my bike home on the Yuba sometime before we went home, I think. To be honest, I wasn't paying much attention. Congrats on your pregnancy-- you're almost there!!

I must confess that I stopped biking when my knees started slamming my stomach, but I did continue with yoga and water aerobics until I went into labor, plus I made it easy on myself and had a home birth. No commute required!

Thanks for sharing your great story!

Loved to see you in Taking the Lane.

You are a total rock star.

Wow, what a great story. Makes any excuses I can think of for not bike commuting (bad weather, running late) pale by comparison. Congratulations!

Newer Post Older Post Home
Subscribe to: Post Comments (Atom)
After moving to Portland, Oregon, we sold our car and started figuring out how to live and thrive without it. This is a blog about that.