I am so glad that I wrote the previous post; without it, I would not be able to share with you all how much better things have gotten.

The kids sleep. Jasper dresses himself. The magazine is humming along-- finances remain tight (subscribe!) but our procedures and relationships are more and more streamlined.

We are on the bike more, though have also been relying on transit for many of our adventures. And we have settled into a nice routine: Wednesdays we go to the Central Library and stay downtown all day, Thursdays are for music lessons and the park, Fridays we pedal up to NoPo to see our friends up there.

Change is inevitable, and one thing that has become very clear is that Jasper is more-than-ready for preschool, our pleasant routine notwithstanding. Heck, Kes's favorite story is about "my first day of school." And me? I'm ready for a full-time job.

I never intended to be home with the kids long-term, though it was fortunate that our circumstances allowed me to stay home through their baby-dom. But Kestrel is less and less a baby every day: she is weaned and working on potty training. She says all sorts of startling things. She runs, and is working on jumping. She's a full-fledged toddler.

The kids are enrolled at a Montessori School on the west side with a start date between mid-April and early-May. I am applying for jobs like a madwoman, with a focus on positions in Project Management, Corporate Communications, or High-Level Administrative work.

If the fates are on my side, by fall you will be hearing about the travails of dual-career car-free parents.

Am I open to getting a car if my dream job demands it? Of course. But I would love to find a way to go on as we are: cheerfully multi-modal, and car- (and insurance- and gas- and maintenance-) payment free.
Posted by inkandpen at 3:37 AM 1 comment:

It has been an exciting, challenging, difficult few months.

But the reason I'm posting tonight is this: I've been riding less. Feeling slow and wheezy when I do. Gaining weight. Losing muscle.

We still don't have a car, and it's not like I'm driving more. Instead: we've been leaving the house less. Having fewer adventures.

The magazine is a huge amount of work, and I have a limited amount of childcare to manage it. The rest gets done at night. Kes isn't sleeping through the night, and Jasper has been having a bad night at least once a week as well. My lifelong insomnia has been acting up. In short: I've been getting catastrophically too little sleep. And one of the places that has been affected by that is my physical well-being, and my ability to be a super cool bike mama.

At the same time, the kids are hard right now, too. Kes is adamant about having exactly the right clothes on before we go out (at 17 months!) and will scream and cry if she doesn't have the *right* hat, the *right* shoes, and so on. And Jasper is an angry nudist; we fight every morning about changing his diaper, about putting on a shirt, about putting on pants, and so on-- not to mention, before going out, having the same fight about coats and hats and gloves and raingear. I've taken to letting him leave the house without, and shoving them into my bag for if he wants them later. So far, he's held his ground, and hasn't yet caught his death. But all of those things make leaving the house harder, and paired with my fatigue and short temper, are sometimes enough to keep us indoors altogether.

I'm not writing to whine, I swear. I know that it is hard right now and I know that it will get better. I have been thinking about enlisting some of my kickass fellow bike moms in getting my ass back in gear, but am afraid that I'm not up for even that, yet. I am so, so tired.

I know that, for folks just getting into this bikey world, it can seem very all-or-nothing. Some people simply "are" bike people, with boundless energy and strength and tolerance for the cold-and-wet; and some people aren't. I'm writing to say: It's fuzzier than that. Being bike-based doesn't mean I always want to ride. Or that I'm always in top form. Or that the bike is always easy.

But I know that a lot of these challenges would still be challenges if we got around differently, except: I'd be getting even less exercise. I'd probably be having even less fun. It would be harder to connect with my kids when we *are* out and about.

I love my bike, even when I'm too tired to ride it. And I hope to be back in form soon. Kes's sleep is better and better. The magazine is creeping back from the edge of a financial cliff (and will do even better if you subscribe!). And the bike will be there, waiting, when I feel more myself again. There is a path from here to there. But right now, it's just hard. 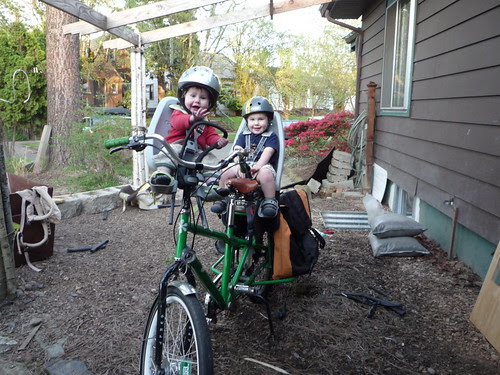 Today was a big day in our family bike world: we implemented two new kid-carrying configurations. The first is a new IT Chair for Dave's Brompton, which lets him carry Jasper, but I'll let him post on that little adventure.

And the second: the end of the boxes on the Yuba, at least for now. Kes is big enough to ride up front, so Jasper moved to a Yepp Maxi on the deck. I'm sad to lose such a distinctive part of their babydom, but glad to be 50 pounds lighter on the bike.

Since there are no babies in our immediate future, I think we'll be selling the boxes. Let me know if you're interested!

Jasper is an airplane.

Nota bene: it is never recommended that you leave your kid in a kid seat when you're not at the bike. This is not safe. Do as I say, not as I do, and all that.

Older Posts Home
Subscribe to: Posts (Atom)
After moving to Portland, Oregon, we sold our car and started figuring out how to live and thrive without it. This is a blog about that.